It’s no secret that I am a fan of Song Joongki. I was totally hooked on him the moment I saw him on a drama called Triple. He has since become my favorite Korean actor.

Although I haven’t gone Joongki gaga in the last 4 years – I’ve been keeping tabs about him. I knew he got out from the army. That he starred in Descendants of the Sun and that he was marrying Song Hyegyo (yes, like any fan I was crushed at first but now I don’t want anyone else to marry him but Song Hyegyo!)

So when I heard he had a new movie – I was psyched! And when I heard it was going to be shown internationally – in the Philippines especially – I went crazy!!! You see, Korean movies aren’t really released in cinemas in my country. So having Battleship Island in movie theaters is such a treat for Filipino hallyu fans. 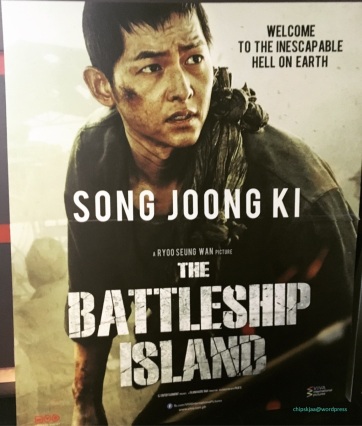 And that’s what me and my friends did yesterday – we watched Battleship Island (군함도).

I couldn’t get over how good the movie was and so I decided to rave about it and perhaps entice some hallyu fans to watch it.

As the movie is new as of writing this blog entry, I’ve decided not to include the story as it will create spoilers. But this movie is the story about the Korean laborers who were working in Hashima Island – Battleship Island – and their attempt to escape from the island. The movie was set in 1945 as World War 2 was coming to a close.

Why I Liked the Movie?

I didn’t really expect much from this movie especially because it was a historical one and truthfully I am not a big fan of war movies. War movies are exceptionally painful and sometimes a little gory to watch. And yes, this movie had all the violence, blood and action you would expect in those movies.

But I did like this movie because the scenes had me convinced of the struggles of the laborers. The acting in this movie was top notch! Kim Su-an stole the show once more for me. She did that in Train to Busan and did it again here. This girl has a great career ahead for her. My second favorite character was Hwang Jungmin’s Kang-ok. His portrayal of a dad who would do anything for her daughter just tears my heart apart.

I also liked the action scenes and the effects. I was cringing the whole time. It was bloody and gory but these effects had me on the edges of my seat the whole time. The action scenes were real enough for me to cover my eyes at time. Spilled guts, amputated bodies, dead bodies – looked true to me. The set and the casts costumes transported me to another era – very different from today. The colors schemes of the scene were perfect for the dialogue. I loved how the contrast was between the dirty dark tones during the laborers scenes and the clean bright tones when the Japanese were on.

I was wide awake in the cinema during the whole 2 hour plus run of the movie. Even my “sleepy, tired, overworked” friend who sat beside me didn’t fall into slumber.

Although the movie was wonderfully executed, I think they could have done something better.
I am no expert – I am just a movie buff and these to would have made the movie better:

1. Story and Character Development
While acting was topnotch, there were some parts that I felt was rushed. Like the introduction of characters. True there were a lot of them, but it would have explained the movie better. Also, there were characters who appeared but I wasn’t sure who they were or why they were there.
Case in point: Joongki’s introduction (wait when did he arrive on the island?), Lee Jong Hyun’s and So Jisub’s characters (their story was nice but it wasn’t well developed)

2. A waste of So Jisub’s talent
So Jisub is to me a great actor – but movie, what happened?  Something was not right about the way he portrayed the Seoul ganster. I don’t know why, but though this movie is a drama, and we know So Jisub is good at dramas, it was a bit lackluster. An ingredient or two was missing.

3. The Japanese
I realize a lot of people might get angry at this comment – but I think the portrayal of the Japanese might be dramatic / exaggerated for me. It’s true that some of them really had twisted minds during the world war. But there were times when the acting was a bit over the top. It didn’t seem realistic – as with the other elements of the movie. I kind of get that it was so movie goers can better understand the emotions of the coal laborers, but it was too much for me.

Overall, this movie was a good watch. I did get my money’s worth and to top it off it had Song Joongki.
I do encourage you to see it – especially all Pinoy hallyu fans. If we you watch, it will open up opportunities for having more Korean movies shown in the Philippines. And on that note, thank you Viva Films for giving us the opportunity to see Battleship! Cheers to more Asian movies shown in the future! You rock!!!

If you’ve seen the movie, let us know what you think!