I don’t know what is it with me and feeling sentimental these days, but I am on a roll of ballad and sad songs. 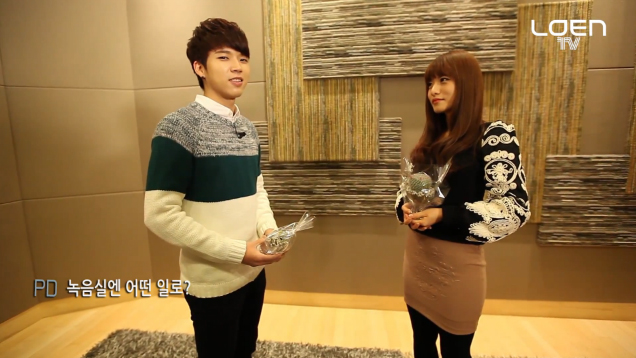 But I am glad I found this song. I love it! It’s the new duet featuring Woohyun (Infinite) and Lucia 심규선. It’s called Cactus 선인장.

OMG! I love videos like this. I love it that Korean videos are now exploring this kind of story telling in their videos. Such a unique video for a nice song. I love how artistic it is. Whoever thought of this is pure genius!

The video shows two frames. And if you look at it closely and slowly follow the story of each frame, you would see that the top one tells the story from the girl’s point of view and the bottom frame tells the story of the guy. Both stories start at different times, the girl from the present (or could be the future) and the guy from the past. Both of the meet at a specific moment, when the guy was trying to break up with the girl. From the girls view, you will see that she is tracing back her steps, while the guy is moving forward. My take on the story is that the guy is sick and he was breaking up with the girl to keep her from feeling the pain. On the other hand, the girl can’t take the break up but later on realizes that the guy was really trying to protect her from being hurt too much. In the end the guy died, and the cactus is there to remind the girl of the love the man had for her.

I love how beautifully the story was made into the video. Especially with the frames telling different stories past and future, but were related to each other. This is effective story telling. I still can’t get over how nice the video was and how well the director played with the symbolism in the video. And let’s not forget the reference of the cactus in the video.

I’ve read that some would have liked to see both singers in the video, but I think this video is just the right thing the song needs. If they were present, they would have ruined the concept and story of the video… I think sometimes, you don’t need to see the singer of the song to appreciate a good song or video.

I love Infinite, so I was really looking forward to this collaboration. But when I learned that the title of the song was Cactus. I had to do a double take. But after listening to it, I couldn’t believe the symbolism of the song. The lyricist’s way of telling us the story of a cactus — and giving it life is very beautiful. Who would’ve have thought of relating that feeling to the cactus! (Also, we have to thank Loenent for making the translation!)

The melody of the song though, is a bit simple. Something that we might have heard before. But, the feeling of sadness is still there. Also, though I love Woohyun’s voice, I would have loved listening to more of Lucia in the song instead of just the last part. I think the part where they did they’re blending, Woohyun’s voice was too loud that I could barely hear Lucia’s voice. Their blending would have been nice if both had the right volume.

Final Verdict: I’d never thought I’d listening to a song called Cactus. But don’t let the title of the song fool you, because the lyrics are very meaningful. This is one of the best videos I’ve seen (so far) for this year. I love that Korean MVs are trying out new concepts and not just the same old things they done in the past.